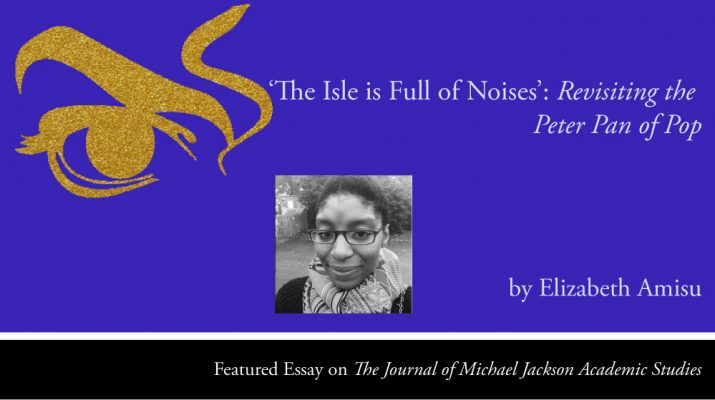 Abstract: The artist, Michael Jackson has oft been given the epithet, Peter Pan of Pop, however, this article presents his association with fictional characters as far more complex. It also discusses Jackson’s parallels with Shakespeare’s Ariel and the authors, F. Scott Fitzgerald and Oscar Wilde. This article is also available in German via this link: https://michaeljacksonstudies.org/die-insel-ist-voller-gerausche-erneuter-besuch-beim-peter-pan-des-pop/.

Amisu, Elizabeth. “‘The Isle Is Full of Noises’: Revisiting the Peter Pan of Pop.” The Journal of Michael Jackson Academic Studies1, no. 1 (2014). Published electronically 25/08/16. https://michaeljacksonstudies.org/elizabeth-amisu-the-isle-is-full-of-noises-revisiting-the-peter-pan-of-pop-2/.

‘THE ISLE IS FULL OF NOISES’: REVISITING THE PETER PAN OF POP
by Elizabeth Amisu

“Be not afeard; the isle is full of noises,

Sounds, and sweet airs, that give delight and hurt not.”1

Much has been made of the fact that the artist, Michael Jackson identified with the fictional character, Peter Pan. To his brother Jermaine, Jackson was more like Benjamin Button while Margo Jefferson compared him to Dorian Gray. However, his relentless pursuit of seemingly impossible dreams shares far more with Gatsby, a character who ‘believed in the green light, the orgiastic future that year by year recedes before us’.2

Often commentators on Jackson’s career resort to fiction to characterise him and through the necromancy of modern media, Jackson became as much fiction as reality. To the once-adoring masses this constructed ‘painting’ of who he was seemed to degenerate. How far this “disintegration” went lies in the eye of the beholder, a conundrum Willa Stillwater goes some way to resolve in M Poetica: Michael Jackson’s Art of Connection and Defiance. Jackson’s life story shares much more with the misunderstood-but-successful authors, J.M. Barrie, F. Scott Fitzgerald and Oscar Wilde than their creations. Barrie emigrated from the world of adults, Fitzgerald died young, and Wilde’s imprisonment would now be characterised as a violation of human rights.3

Michael Jackson’s (like Gray’s outward appearance) personality remained youthful and beautiful. He was creative to his very last day. As for his face, it had certainly changed from Off The Walland subsequently Thriller. This was due in some part to age, diet, two skin-altering diseases (vitiligo and lupus) and bouts of injury/stress-induced addiction to medication, as well as cosmetic alterations.4

The one factor one should not forget to attribute Jackson’s penchant for physical change, ‘I have had my nose altered twice, and I recently had a cleft added to my chin. But that’s it. Period’, were the artist’s stress levels after the success of Thriller. Stress is the silent cause of a phenomenal range of diseases and Jackson was no stranger to its extremes. This was an artist who bore the weight of two false allegations and the media storms which accompanied them, a never-ending cycle of lawsuits, being a single father-of-three as well as a one-man conglomerate who also happened to be its most lucrative product.5

As for Peter Pan, Tanner Colby iterates in The Radical Notion of Michael Jackson’s Humanitythat the character is tortured by night-terrors and subsequently sees death as a ‘great adventure’. Pan exorcises his frustration and anger by ruthlessly slicing off Hook’s arm and in true Lord of the Flies style almost kills one of his own for shooting Wendy down. Furthermore, Pan’s relationship with Tinker Bell is characterised by bouts of lover’s jealousy.5

So at what point did the ‘boy who wouldn’tgrow up’ transform into the ‘boy who couldn’tgrow up’? During the narrative everyone else evolves, changes and grows except for Peter Pan. Jackson, in one way, suffered the same fate. His childhood face and persona became a symbol and a commodity. In his later life it would be a weapon hurled at him by his detractors: why don’t you look this way anymore?

Just as little Michael Jackson’s expressions were ‘not indicative of the boy behind the smile’, cherub-faced Pan can be viewed as an ancient prisoner. How long has he been in Neverland? Does he even know? Does anyone? The tale begins with the loss of his shadow and what is a shadow except the most intrinsic part of ourselves? When Pan cannot reattach it he falls into desperate crying. Jackson also, used to cry with loneliness. How could he ‘live in himself when he [was] everywhere outside[…] the world is plastered with him, he is a thousand billboards. And the tragic truth seems ancient, that only onstage can he get back inside.’7

We are never told what caused Pan’s shadow to make its bid for escape. Could it be that life was so terrible even his shadow wanted out? It’s clearly unbearable enough for Pan to steal lost boys ‘who fall out of their perambulators when the nurse is looking the other way’. What he seems to long for most is someone to share in his otherwise lonely existence.8

If writers continue to use the diminutive analogy, ‘Peter Pan of Pop’ for a consummate artist like Michael Jackson they should use the whole story or find others more appropriate. Jackson’s personal Neverland only became a prison after it was ransacked twice due to false accusations. Even then he couldn’t bear to sell it, though he could no longer live there. Before that it had been a charitable venture, a gift for himself that he shared with children who were less fortunate. He did this for decades and hardly ever drew attention to it.9

I would argue that the fictional character Jackson most embodies is that of Ariel, the imprisoned spirit in Shakespeare’s The Tempest, whose presence throughout the play is a continual cry for freedom. ‘Remember I have done thee worthy service,/Told thee no lies, made thee no mistakings, served without grudge or grumblings’ echoes Jackson’s own words, ‘You keep changin’ the rules/ While I keep playin’ the game/I can’t take it much longer/I think I might go insane.’ The fact that Ariel is more powerful than his captor, Prospero does not help him, after all it is Ariel who conjured the storm after which the play is named.10 Ariel remains trapped within a prison of Prospero’s making. He exchanges one master for another although he is the talent. Without him neither of his masters would have any real power – parallels with Jackson abound – pick a master: family, fans, audience, managers, record label, lawyers, sycophants or the media.

The most unnerving parallel between the two is that Ariel’s most entrancing ability on the stage is his song and flight. Both The Tempest(1611) and Peter Pan(1904)were plays in which unfolding drama became a microcosm of events that transpired in the wider world: Barrie’s regression, Shakespeare’s ageing and colonisation. In 1983 Barney Hoskyns described Michael Jackson as ‘the boy that wants to fly; on stage he soars into the unreal.’ In reality Ariel ‘could fly but he could not fly away’ while Pan could fly away but always had to fly back. Jackson, unlike the other two was flesh-and-blood and true flight eluded him. Instead, he joined the ranks of Barrie, Wilde and Fitzgerald and became, like all great fiction, a work of art.11 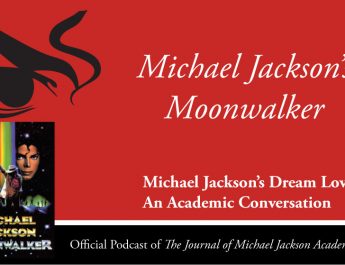 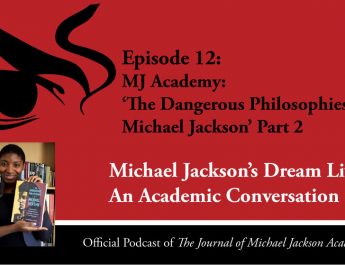