Abstract: February 2016 discusses the recent news that the white actor Joseph Fiennes, was cast as Michael Jackson in an upcoming comedy program on Sky Arts.

Hello everyone, and happy Valentine’s Day,
The last month has been pretty exciting in the world of MJ Studies, especially with the recent news that the white actor Joseph Fiennes, was cast as Michael Jacksonin an upcoming comedy program on Sky Arts; the new release of Spike Lee’s Off the Wall documentary; a new teaser trailerof my academic book, The Dangerous Philosophies of Michael Jackson: His Music, His Persona, and His Artistic Afterlifeon YouTube; the Journal of Michael Jackson Academic Studieseditors featuring on Dancing With the Elephant for the first time; and of course, the latest episode of our podcast, Michael Jackson’s Dream Lives On: An Academic Conversation – What is Michael Jackson Studies?
The internet was ablaze this last month with the news that Joseph Fiennes would be playing Michael Jackson in a ‘half-hour comedy will be written by Neil Forsyth, who wrote – as alter ego Bob Servant – Delete This at Your Peril, a collection of humorous email conversations with would-be con artists and spammers’.[i]A later Guardian article showed how much traction this debate has really gained:

Regardless, one would be allowed to question why the makers chose to cast the white star of Shakespeare in Love as Michael Jackson. Asked about the thinking behind this, Collett wrote: “Sky Arts gives producers the creative freedom to cast roles as they wish, within the diversity framework which we have set.”

But “diversity”, a word Selma director Ava DuVernay wants people to stop using, is a blanket term. It’s easier to talk about than “racism”, “structural racism” or “anti-blackness”. Having a white actor play such an important African American legend remains problematic.[ii]

The Article of the Month is:

We released a new podcast last week on the MJAS. It’s called ‘What is MJ Studies?’ In it we discuss all the different academic disciplines which involve the subject, and of course, the connection between Michael Jackson and Johann Sebastian Bach, one of our favourite topics. We also discuss how you can join us… and all our exciting plans for the new year.
https://youtu.be/vznNQ6rxz7Y
Over the next few months I will continue to release videos, mini-documentaries and lots more, including new information on the launch and my appearance at Kingventionthis year. So don’t forget to subscribe to keep in touch.

3 Things I’m Grateful for This Month

Until next month,
Eliza x 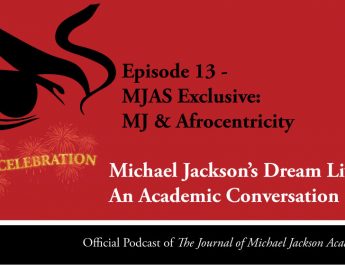