Abstract: In this month’s column, Kerry Hennigan discusses how history will perceive Michael Jackson and ponders if there will come a time when his name will cease to be associated with unwanted controversy. She then poses the question of who should write the real story of Michael Jackson for future students of the arts and popular culture so that they can better appreciate his positive global impact.

Daring to recognise (with no need to apologise): Michael Jackson – the HIStorical view and who gets to write it.   By Kerry Hennigan 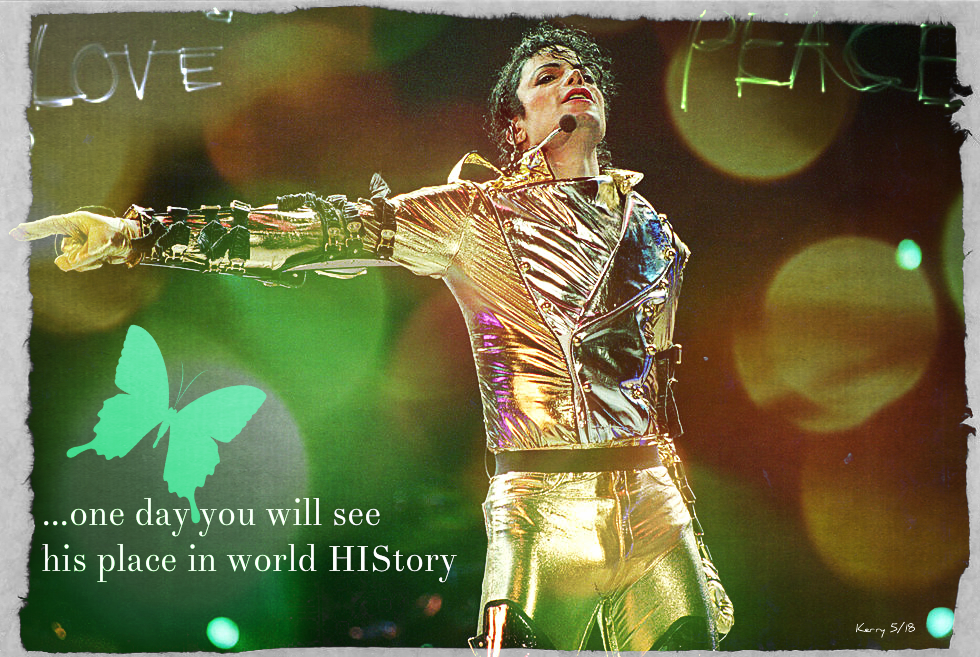 He say one day you will see

His place in world history

He dares to be recognized

In the forward to his historical novel Rise to Rebellion, author Jeff Shaara noted that it had become fashionable to re-examine history and “throw a supposedly new light on those who are famous for their accomplishments, to instead expose their faults, to topple the statue of the hero, to replace the honour and respect with the sensational and the shameful, as though it were the only meaningful way these characters can be relevant to today’s world.” [2]

He was writing about famous 18th century political and military figures on both sides of what became the American War of Independence.  But his words set me thinking about how history would come to perceive of Michael Jackson once some of the dust has settled on the arguments over the handling of his legacy, and the tabloid media have stopped using his name as click bait.

As Elizabeth Amisu wrote in an article published on the anniversary of what would have been Jackson’s 56th birthday, “Some will and already have attempted to rewrite history, even while Michael Jackson was making it. They discount and devalue his contribution as one of the most incredible artists of our age. He symbolizes the best in us while his mistreatment symbolizes the worst in us.” [3]

Dare we assume that a time will come when Michael Jackson can be perceived without the distorting filters of spurious accusations, whether about his behaviour, his appearance, his art… anything, in fact?  Sadly, I have some doubts about that ever being possible. If we look at public figures whose lives have involved widely broadcast controversy, not to mention, in Jackson’s case, a criminal trial, it bodes ill for their legacy ever being free of the sickening taint of false allegations and campaigns of outright character assassination.

In 2014, Zack O’Malley Greenburg wrote about some of the critical reviews for his book Michael Jackson, Inc, noting that rather than addressing the book the reviews “merely seemed like excuses to rehash old arguments and heap judgement on the King of Pop.”  He further wrote “it seems for many observers the subjective has settled over the years like sediment at the bottom of an ancient ocean, forming a solid mass still sometimes mistaken for objectivity.” [4]

In truth there is no such thing as objectivity, but there are those who will try to engage, and others who will not even attempt to step out of their own comfort zones when it comes to understanding or just commenting on “otherness” particularly when it is accompanied by substantial power and influence such as Jackson possessed throughout his adult career. [5]

Does that mean, then, we should accept as inevitable the controversial (specifically, the disputed and erroneous) aspects of what is said and written about Michael Jackson being inextricably linked with (and overshadowing) the real story of his life, artistry and philanthropy?  This conundrum highlights the importance of the investigative work done by dedicated fans and researchers and is one reason why MJ Studies and the role of conscientious academics are so vital to Michael’s long-term legacy.

There should be absolutely no need for anyone with a desire to write seriously and positively about Michael Jackson, his art and influence on popular culture, to be expected to be apologetic for their choice of subject matter – or for being a fan.  However, in assuming the role of a chronicler, we do need to be aware of the pitfalls, and in particular, be cautious in terms of our sources.  It has to be acknowledged that academic qualifications and excellent credentials mean little if the research isn’t done diligently and reviewed frequently.  One can achieve considerable acclaim writing academically on Michael Jackson without really knowing much about him. [6]

The question then is who should tell Michael’s story for the benefit of future students looking back on 20th and 21st century popular culture and one of the greatest game changers in the field of entertainment?  I believe there is an on-going and, hopefully, influential role for us in the way history comes to perceive and understand Michael Jackson.

This doesn’t mean ignoring the controversial aspects of his life; rather it means viewing these in the context of the penalties society often imposes on individuals who are out of step with (i.e. ahead of) the mainstream, even when they do no harm.  As James Baldwin said of Michael: “He will not swiftly be forgiven for having turned so many tables, for he damn sure grabbed the brass ring, and the man who broke the bank at Monte Carlo has nothing on Michael.” [7]

As Michael Jackson fans who are writers, bloggers, researchers, teachers and lecturers – seekers after the truth – we need to keep the positive dialogue in motion, to highlight what other writers are missing and to keep Michael’s legacy growing.  “Otherwise it will never be done.” [8]

[3]  Amisu, Elizabeth. “Heard It on the Grapevine’: Are We Losing Michael Jackson All over Again?” The Journal of Michael Jackson Academic Studies 1, no. 3(2015). Published electronically 30/3/15 at https://michaeljacksonstudies.org/heard-it-on-the-grapevine/

[4]  Greenburg, Zack O’Malley “Writing About Writing About Michael Jackson: What Some Critics Still Get Wrong” in Forbes(2014) https://www.forbes.com/sites/zackomalleygreenburg/2014/08/28/writing-about-writing-about-michael-jackson/#5c1761f9520d

[7]  Baldwin, James as quoted in “The Baldwin Prophecy” by Joseph Vogel http://www.joevogel.net/the-baldwin-prophecy