Abstract: In this month’s column, Kerry Hennigan looks at the history of Pepsi Cola’s sponsorship of Michael Jackson, both before and after the accident in 1984 that resulted in him suffering serious burns with life-long consequences.  She also looks at subsequent deals Michael, and later his Estate, made with Pepsi and proposes a way for fans to think past the controversy that surrounds the company’s continuing assocation with him.

Sponsoring Michael Jackson – the matter of Pepsi Cola and their association with the King of Pop.  By Kerry Hennigan 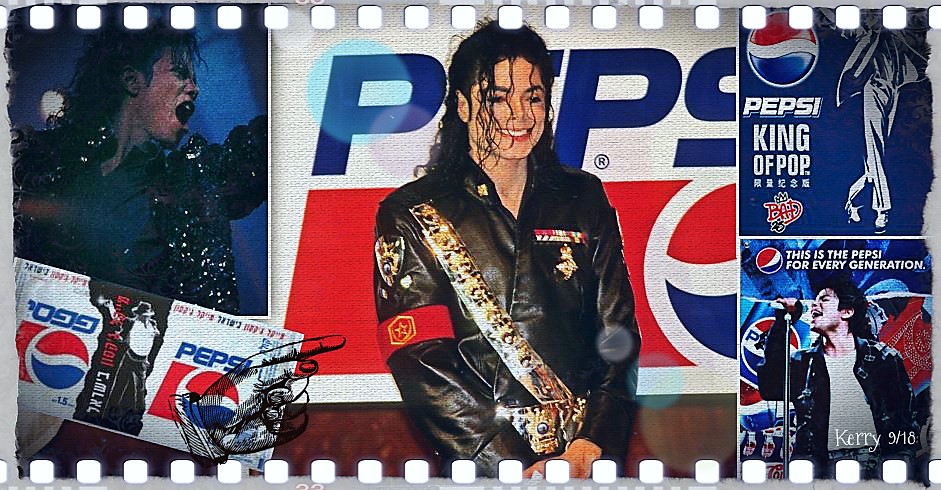 Two days after I’d celebrated the 60thanniversary of Michael Jackson’s birthday in Las Vegas, the drink machine at my hotel dispensed a bottle of Diet Pepsi with Michael’s image on it.  Despite having moved on to Palm Springs by this time, it still felt like I’d won a jackpot!

I am aware of the controversy amongst fans about Pepsi’s involvement with Michael; some would have us feel like traitors for patronizing the brand.  After all, he suffered serious burns with lifelong consequences when filming a Pepsi commercial with his brothers back in 1984.

“I still remember how scared those Pepsi executives looked the night of the fire,” Michael wrote in Moonwalk.  “They thought that my getting burned would leave a bad taste in the mouth of every kid in America who drank Pepsi.  They knew I could have sued them and I could have, but I was real nice about it.  Real nice.” [1]

The money Pepsi paid in compensation (US$1.5 million) was donated by Michael to the hospital where he was treated for the (now defunct) Michael Jackson Burns Unit. He also scored a new deal worth $5.2 million – at the time the highest endorsement fee ever paid to a musician. [2]

The direction Michael received that resulted in his burns came from Bob Giraldi.  The latter had directed the Beat It video after being hand-picked by Michael on the strength of Giraldi’s Eye Witness News commercial about an elderly blind couple holding a block party for their new black and Hispanic neighbors. Giraldi went on to film the Say, Say, Say video before working on the commercials with Michael and his brothers for the Pepsi Generation campaign. [3] [4]

In paying tribute to Michael in 2009, a Pepsi spokesperson recalled the burns accident as “a terrifying event that we’ll never forget.” [5] It was, as Michael himself said in Moonwalk, “stupidity, pure and simple.”  Safety regulations had been disregarded, in that the pyrotechnics were only two feet away from either side of his head. Five years after the accident, Giraldi said, “It’s not a moment that I like to remember. I’ve put it out of my repertoire when I think of working and being around Michael in his genius.”  [6]

Of course, Michael’s many fans haven’t put it out of their list of things that happened to him because of errors in judgement by others – people in whom he trusted. But, if as Giraldi maintains he and Michael remained amicable and would later “greet each other with hugs” is it logical for us as fans to hold a grudge – either against the director or, even less logically, against the company (i.e. Pepsi) for whom he was working?

If Jay Coleman had had his way, it would have been Coca Cola rather than Pepsi, if the rival company had picked up on the idea he first pitched to them.  In their short-sightedness, Coke saw a campaign that featured Michael Jackson as “a more targeted, ethnic campaign”.  They offered Michael US$1 million, and he turned it down. Whereas Pepsi, Coleman’s next target, liked the idea of Michael Jackson as the poster-boy for its new image.  So, Michael signed with Pepsi – for US$5 million – making it what, at the time, was the most expensive marketing campaign ever. [7]

After the accident, Bob Giraldi never worked with Michael again, but despite continuing to work with a lot of celebrities, he has stated that Michael was by far the nicest.  “My relationship with Michael was kind and gentle,” he says. “There was a kindness and gentleness that I don’t usually see in the performers. I’ve done this for 40 years and I’ve worked with a lot of so-called self-important people, and it seems that Michael still remains the number-one celebrity that I’ve ever worked with yet.” [8]

Despite having suffered those horrific burns to his scalp, Michael continued to work with Pepsi, predominantly with another of his music video directors, Joe Pytka, at the helm.  These commercials, The Chase (1987), Dreams (1992) and I’ll Be There (1992) are fan favorites.  Michael also accepted Pepsi’s sponsorship of his Bad and Dangerous world tours and their US$1,000,000 donation cheque for his Heal the World Foundation – and all without being a Pepsi drinker himself.  [9] [10]

He also continued to use pyrotechnics in his performances – right up to and including This Is It.

There is a myth among some fans that Pepsi fired Michael over the Chandler false accusations (1993).  That simply isn’t true.  Their sponsorship for the tour lasted until the tour ended (prematurely) when Michael went into rehab.  We could, of course, blame the painful after effects of the 1984 accident for that, but what does it gain us, other than considerable personal angst?

As fans we may think we act with Michael’s best interests at heart, even retrospectively. However, in doing that, I think we need to keep his credo of “love is the answer” in mind.  While we personally may not have the strength of Michael’s own convictions, I still think it pays to look at the situation – in this case the Pepsi sponsorship scenario, including the deals made with them since his passing – and ask, “what would Michael do?”

How do we answer that question when he is no longer here for us to ask him?  We can only look back at what he did when he had the opportunity, even in the wake of the horrific 1984 accident, and the answer there is obvious.

He accepted their money and put it to good use – repeatedly.

Kerry Hennigan
(whose cola of choice is decaf Diet Coke)

[9] Pepsi commercials “I’ll be there” and “Dreams” https://www.youtube.com/watch?v=eJvhtUMSHPM

Pepsi and Michael Jackson: A History in Ads  https://www.marketingweek.com/2012/09/01/pepsi-michael-jackson-a-history-in-ads/