Abstract: June 2016 is all about The Journal of Michael Jackson Studies on Vindication Day.

Vindication Day
June’s ‘MJ Studies Today’ is all about The Journal of Michael Jackson Studies on Vindication Day. The word, ‘vindication’ comes from the Latin, ‘vindicatus’, meaning ‘to free someone from servitude’ and claim that person as free. On the 13thof June, eleven years ago Michael Jackson was acquitted of all charges of child molestation which had been levied against him.

The trial is beautifully documented by Mike Smallcombe, which is academically reviewed here by the The Journal of Michael Jackson Studies. It is also covered in Dr. Karen Moriarty’s Defending A King, reviewed academically here. We are pleased to be presenting exclusive interviews with Mike and Karen in the next few months.

One of the wonderful roles we serve at The Journal of Michael Jackson Studies is providing academic reviewsof prominent publications on Michael Jackson, which can be found here. These beautiful reviews serve fans, researchers and also the wonderful authors who write these books. We also involve the authors themselves in unique author interviews, with people like Joseph Vogel, Susan Woodward, Lisa Brisseand Zack O’Malley Greenburg.

Although Jackson was vindicated all those years ago, his legacy remains very uncertain. Two decades of misinformation mean that it’s going to take a lot of hard work and focus to turn the tide. It is lovely reading about the wonderful contributions of fans, authors and content-creators to further the expansion of worldwide knowledge of, not just Jackson’s innocence (though there is great positivity in that) but his artistry also.
Our recent publication on Michael Jackson and Princeis an excellent example of this kind of work.

The Journal of Michael Jackson Studies is an official academic publication, and such a wonderful way to grow and nurture the academic study of Jackson, forging new global connections and reiterating through academic essays, articles, interviews and reviews that Jackson’s artistry is worthy of study.

We know you love MJ as much as we do, as much as a Shakespeare academic loves ‘old Will’, and spends several hundreds of pounds a year on journal subscriptions.

So from this day, June 14th, we are now offering friends of the Journal of Michael Jackson Studies the opportunity to donate. This can be found here. As a supporter from June 2016-June 2017, you will receive a plethora of discounts and gifts.

My last nod of the column goes to author, Mike Smallcombe, who wrote the stunning biography, Making Michael: Inside the Career of Michael Jackson, reviewed here. Mike’s story, inspiring as it is, can be found in a wonderful recent special by the MJCast.

This month, with both Vindication day and the anniversary of Michael’s death, let us remember that Michael is free, it’s for us to preserve what he left us, in every way we can.
Have a joyful June,
Eliza x 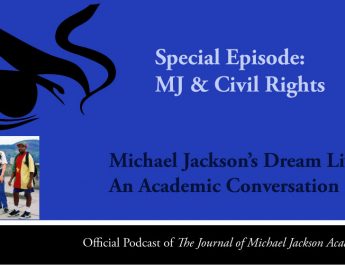