Abstract:  This month Kerry Hennigan continues her discussion of Brice Najar’s publication Book on the Dance Floor: Let’s Make HIStory in the Mix  which was previously the subject of our February 2021 column.  In his book, Najar interviews numerous Michael Jackson collaborators on the King of Pop’s “Blood on the Dance Floor” remix album and brings to light little-known details of Jackson at work in the studio, on his “Ghosts” short film, and on tour.

Hennigan, Kerry. “MJ Studies Today LXIV: “Have you seen a Ghost?”  Insights into working with Michael Jackson as told in “Book on the Dance Floor” by Brice Najar Part 2. (14-04-2021).” The Journal of Michael Jackson Academic Studies 7, No. 4 (2021). https://michaeljacksonstudies.org/mj-studies-today-lxiv/

“Have you seen a Ghost?”  Insights into working with Michael Jackson as told in “Book on the Dance Floor” by Brice Najar Part 2.  By Kerry Hennigan

Alex Breuer, sound engineer and programmer at Dierks Studios during Michael Jackson’s sessions for his album “Blood on the Dance Floor” recalls when he first met Jackson.  Breuer was playing and tweaking some sounds when Michael walked in.  “That’s very nice,” the pop idol commented.  “My name is Michael.”  It’s a memory that causes Breuer to laugh when he tells it to Brice Najar, author of “Book on the Dance Floor” which chronicles the making of Jackson’s 1997 re-mix album.  [1]

After playing on the piano back to back with Jackson for a while, Breuer was informed he could stick around while Michael recorded vocals.  “It was a huge learning,” Breuer says.  “I was really amazed!  The tightness of how to do it, how quick it could make a choir with a lot of layers.”  When he left, studio owner Dieter Dierks followed him out and said, “Have you seen a ghost?”  Breuer explains that it had been a weird situation, “but in a very, very nice way – the energy Michael used to transport and the fact that they gave me a feeling of importance like I was a member of the crew, I mean, instantly!” [2]

Dierks Studios located in Pulheim near Cologne, Germany, was one of two European studios where “Blood On The Dance Floor” album sessions took place.  At Dierks, Jackson and his small team worked on refining the track “Ghosts”.  The other was Mountain Studios in Montreux, Switzerland, where Jackson’s crew took up residence in January 1997 during a break in the singer’s massive HIStory world tour.  When interviewed by Najar, Brad Buxer recalled the interlude in glowing terms.  “Montreux was very small, and the vibe was wonderful! The four of us got along beautifully.  Michael was the fifth person and the boss…  It couldn’t have been better and that was the vibe of the whole process.” [3]

Buxer’s role in not only the “Blood on the Dance Floor” album, but in most of Jackson’s projects since 1989, gives him a perspective on the artist’s methodology, work ethic and personality that is difficult to match.  He explains that Jackson did not change his attitude to the work depending on the track he was working on.  “He never compared one song being better than another and he never made a big deal about any song.  What he did do was, no matter what song we were working on, if it was going to get an orchestra and a choir, it had to be the best orchestra and the best choir.  Whatever song he was working on, there was absolutely no budgetary constraint.” [4]  As Jackson himself had emphatically stated in his autobiography “Moonwalk” back in 1988: “My goal is to do the best I can in every area.” [5]  This attitude to his art persisted through to the end of his life.

Photographer Christophe Boulmé from the French Michael Jackson magazine “Black & White” recalls Jackson telling him and his colleagues from the magazine about the film he had been making, which would eventually  be released as “Michael Jackson’s Ghosts.”  “Something happened as he was describing the project, and I could really feel his enthusiasm… He was so positive, and he really believed in the potential of this film, thus transmitting a wonderful and creative elation.”  Boulmé’s own enthusiasm for Jackson’s vision was not wasted, as the photographer went on to create the poster artwork for the “Ghosts” film, and the illustration for the Limited Edition Minimax CD of “On The Line” which was included in the “Ghosts” VHS box set.  “On The Line” had been used in the opening credits of the Spike Lee movie “Get On the Bus” but had never been released.  “It’s a black and white picture with a golden eye,” Christophe says of his illustration, “which is a reference to a film with Liz Taylor, called Reflections in a Golden Eye!” [6]

The inclusion of minutia like this is but one of the rewarding aspects of “Book on the Dance Floor.”  Brice Najar’s interviews with various Jackson collaborators encompass personnel who were not just present in the respective studios with the artist, but who were involved in live performances and promotion and marketing.  Some of those interviewed are Doug Grigsby, whose first job for Jackson was pre-production for the 1993 Superbowl show, and Darryl Phinnessee, who was a backing singer in each of Jackson’s solo world tours and was back in that role for the “This Is It” rehearsals.  His opinion of his former boss reflects the attitude of most of his colleagues.  “You can take all of those lights away,” he says,  “you can take all of us away and you put Michael on stage with a light on so you can see him, and it would be absolutely electrifying and exciting because he was the real deal, he was the real thing!  You can’t take your eyes off of him!” [7]

Fans of Michael Jackson and students of his artistry will find much more detail in Brice Najar’s book that informs and illuminates the 1996/1997 period of Michael Jackson’s career.  “Book on the Dance Floor” was a way for the author “to immortalize that time, to experience it again.”  Najar was only 18 when he attended Jackson’s HIStory tour concert in Lyon, France.  The time that has elapsed since then has given him what he describes as a clarity of vision that he didn’t have all those years ago.  He writes: “It has also only been possible at this stage in my life, with the determination and faith in making contact with collaborators of the King of Pop, to combine my own memories with theirs.”  The results are a tribute to his dedication to the project and to Michael Jackson’s artistic legacy. [8]

Available in both French and English language editions, Book on the Dance Floor: Let’s Make HIStory in the Mix published December 2020, can be purchased from Amazon.  For more about the author visit his personal website at https://bricenajar.com/en/auteur-en/.

Hennigan, Kerry.  “What is it about ‘Blood on the Dance Floor’? or: Michael Jackson as alpha male.”  Published electronically 30 June 2016.  https://kerryhennigan.wordpress.com/2016/06/30/what-is-it-about-blood-on-the-dance-floor-or-michael-jackson-as-alpha-male/

Illustration: Photo montage by Kerry Hennigan. No infringement of photographic copyright is intended in this not-for-profit educational exercise. 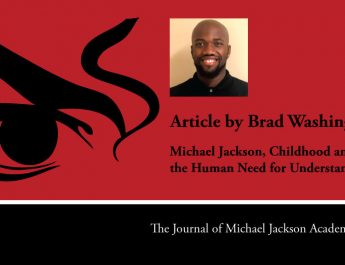