Abstract: In this month’s MJ Studies Today column, Kerry Hennigan looks at the making of Michael Jackson’s album “Blood on the Dance Floor” as explored in the recently released book by Brice Najar, titled Book on the Dance Floor: Let’s Make HIStory in the Mix.  The focus here is on some of the album’s newly recorded and previously unreleased songs that are too often neglected by music critics when discussing Jackson’s catalogue.  Najar’s meetings and interviews with some key personnel involved in these recordings afford greater appreciation of these unique tracks, more of which will be addressed in a Part 2 article at a later date.

In 1997, Michael Jackson did something that was unprecedented in his adult recording career.  He released an album half composed of remixed material from his double album opus “HIStory, Past, Present and Future, Book 1” which had appeared just two years earlier.  Jackson famously didn’t care for remixes – not after he’d worked so long with his recording team to get his songs to a point where he felt them worthy of release.  But, in addition to the remixed tracks, 1997’s “Blood on the Dance Floor” contained enough new material to make it worthwhile for any Jackson fan to include in their record collection.

And what new tracks they were – the title track “Blood on the Dance Floor” with its driving Latin beat (and sizzling short film), the shock of the dramatic, but brilliant, “Morphine”, and tracks from Jackson’s film “Ghosts” which had first screened in limited release in 1996.  Plus “Superfly Sister” which appears to be about Jackson’s sister La Toya who, at that time, was estranged from her family and living under the abusive control of her then husband.  Jackson seems to be summing up the couple’s relationship with the lyrics: “Sister’s married to a hood/Sayin’ that she got it good.” [1]

These songs are sadly overlooked by many writers when reviewing Jackson’s canon because of their inclusion on what was labelled a “remix album.”  In talking to Laurent Hopman of the famous French fan publication “Black & White”, author Brice Najar discovered exactly how Jackson felt about the album which was rushed released in time for the start of the second European leg of his HIStory world tour in May 1997 in Bremen, Germany.  As previously mentioned, Jackson didn’t like remixes, and he had wanted the new material to be released as an EP.  But Sony knew that fans flocking to his forthcoming shows would snap up any new product, and an album meant greater returns than an EP.  (It also, incidentally, resulted in Jackson having the best-selling remix album of all time, albeit an honour he hadn’t sought.)

As explored in Najar’s book Book on the Dance Floor: Let’s Make HIStory in the Mix, much of the work on the album’s new tracks took place in Mountain Studios in Montreux, Switzerland, then owned by David Richards who had connections (through marriage) with the family of silent screen icon Charlie Chaplin, one of Michael Jackson’s heroes.  In writing his book, Najar visited the studio, now a museum called  Queen Studio Experience because of its association with the late Freddie Mercury and Queen.  He also interviewed Sam Curtis, who had been a young sound engineer working at Mountain Studios when “Blood on the Dance Floor” was in production.  He remembers having an uncharacteristically short, short haircut at the time, and Michael being concerned that Sam was a Nazi. “Because I had my head shaved, he got paranoid about the fact that I had blond hair and blue eyes, but that guy who was his personal assistant said to him, ‘No, Sam is not a Nazi.’”  [2]

Najar also interviewed Jackie Gouche, who sang with the Andre Crouch choir, and Robert Chausow on the subject of “Morphine”.  Gouche remembers Michael peering around the door as the choir was praying before its recording session, “like a curious child.”  Chausow contributed to the strings on “Morphine” and all the songs recorded for “HIStory” that had strings, which was the sort of gig he did for many artists, though usually he and his fellow musicians would be playing to just a click track.  “Thinking back to that day [recording the strings for “Morphine”] it was definitely memorable, mostly because of how unusual and strange it was – strange and random.  Especially sitting in the dark!” [3]

Bryan Loren, who in 1990 was named a Sony Innovator in Sound, [4] provides insight into the work he did with and for Jackson for the “Dangerous” album, although “Superfly Sister”, first conceived in early 1989, didn’t get an official release until the “Blood…” album in 1997.  As to the lyrics, Loren says he was unaware who inspired them, as only Jackson was involved in writing them, and that neither the lyrics nor the vocal take from the “Dangerous” recording sessions were changed for the version released in 1997.  Loren’s contribution to the book, unlike the other personnel quoted, came largely as a result of a Music First Association seminar in 2016 and was further informed by a 1998 interview in “Black & White” magazine.

As the author of Book on the Dance Floor and its immediate predecessor Let’s Make HIStory, Najar acknowledges the debt he owes to the much loved French magazine.  In the 1990s, “it was almost exclusively by reading issues of Black & White magazine that I would follow Jackson news every quarter,” he writes.  “This story is one that thousands of us lived through.  We would go to the newsstand to get our passport to Michael.  We would turn the pages to develop a stronger connection with the artist.  Those feelings were possible because of the bond between the Black & White team and the singer.” [5]

Najar comes from a generation of fans who avidly followed Jackson by buying records, reading magazines, and attending concerts.  Now he is an author who conducts interviews with personnel who were involved with Michael Jackson at many different levels, who share their stories of the King of Pop so the world can be better informed of his genius.  With both Book on the Dance Floor and Let’s Make HIStory Brice has provided interview transcripts and personal insight invaluable for students of Michael Jackson Studies.

“enjoy that simple dance…” photo montage compiled by Kerry Hennigan.  No copyright infringement is intended in this not for profit, educational exercise. 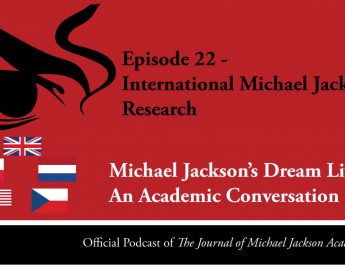