Abstract: The November column by Kerry Hennigan is Part 2 of Pictures At An Exhibition – photos and art where Michael Jackson was the model himself and others where he was not.  But, as Kerry states, an image of an impersonator challenging the viewer, as Michael Jackson always challenged himself and his audience, can still be representative of what he stood for.

Pictures at an Exhibition, Part 2: Portrayals of Michael Jackson by Greg Gorman and David LaChapelle.  By Kerry Hennigan

Greg Gorman and David LaChapelle are both photographers whose work is known and respected internationally. Both have photographed many celebrities over the years. Their styles are very different, but their artistry is undeniable.

Some of Gorman’s portraits of Michael have been frequently published, including the shot inspired by a classic image of actress Gloria Swanson, whose features are partially obscured behind a veil of lace. Gorman’s version of this photograph with Jackson behind a similar veil is well known, as is his portrait of the King of Pop ‘wearing’ the cast-off skin of a pet tarantula on his cheekbone.

However, when in late 2015 another photograph by Gorman surfaced in a large exhibition of his work in Germany, its nature and its rarity caused a stir amongst Jackson fans the world over. I read – and heard in person – people denying outright that it was Michael Jackson in Gorman’s semi-nude colour image from 1987. [1] [2]

Standing in front of that portrait in the Museum of Photography in Berlin in May 2016, I looked into the face of the shy performer who was always striving to challenge himself – and us – and our concepts of beauty. It was a deeply introspective and incredibly beautiful portrait. Never for a moment had I doubted its authenticity, based both on the photographer’s reputation and on the likeness itself.

(Following the launch of the exhibition and resultant publicity, corroborating evidence of Jackson’s participation in the photo shoot surfaced on social media from Michael’s make-up artist who attended him at the session.)

Greg Gorman himself explained the circumstances of his photograph in an interview about the exhibition (titled “Colour Works”) in Berlin. “I’d worked with [Michael] over the years and he really liked my pictures and I loved working with him, he was a real artist. He took photography very seriously and prior to our shoots we’d talk for hours on the phone about what we were gonna do, how we’d go about it. He’d have ideas and we’d bring them together. He loved my female and male nudes and he wanted to shoot something provocative, but obviously not a nude so that’s how it came about. It’s never been seen before. He was very easy to work with, never in a rush and always very direct.” [3]

Those who decried the portrait as being a type that Michael would never have sat for appear to have forgotten his semi-nude frolic in the video for “You Are Not Alone”. If his love for Maxfield Parrish imagery encouraged him to disrobe for the sake of art, why would his love for Gorman’s photography of the human body not also have prompted him to try something that was, for him, a bit daring?

Of course, the Gorman photograph (1987) predates the “You Are Not Alone” video shoot (1995) by a few years. Perhaps increased self-confidence – and his marriage to Lisa Marie Presley – had further emboldened Michael by the time the video was filmed.

Over a year later, I stood before three more portraits depicting Michael Jackson in an exhibition of the works of David LaChapelle – only they weren’t really Michael. LaChapelle’s images are like paintings – they are true “creations” – evocative, poignant and reflecting Jackson’s impact on popular culture and our reactions to his passing. Despite the photographer’s use of a look-alike (Carlo Reilly) and some clever digital manipulation to achieve his images, many fans have happily shared them on their social media pages. And they’re not wrong to do so if we consider the works as artistic creations meant to represent Jackson, even though he never posed for them.

In an interview published in the Huffington Post, LaChapelle, a self-confessed Michael Jackson fan, explained his decision to depict Michael as a martyr: “We persecuted him. Every person who ever bought a tabloid or watched the news, we all contributed to his death by taking in that form of gossip.” [4]

But why would some of us “share” a depiction of Michael Jackson as portrayed by an impersonator, while denying a photograph of the real person? Is there a rationale that explains our inclinations to happily accept some images of Jackson while denying others? Or is it that we are blinded in our zeal to ensure no-one takes advantage of Michael when he’s not here to defend his integrity? The latter is honourable to a degree – but not when it impugns the integrity of another artist when there is no evidence of any duplicity.

In viewing these images, perhaps we are seeing our own vulnerabilities, insecurities, beliefs and aspirations reflected back at us. That’s the nature (and, one could say) the purpose of true art. The more powerful pieces surprise and challenge us, and sometimes make us feel uncomfortable. As a performing artist, Michael Jackson was all about challenging himself and his audience – stretching our minds to encompass his vision for a better world and a more inclusive sense of beauty.

And, as these examples have revealed, through the work of others he’s still doing that. 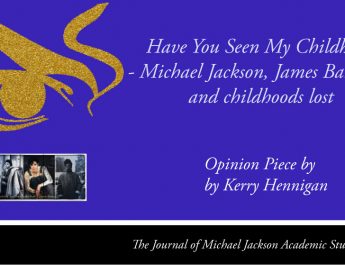 “Have you seen my childhood?” – Michael Jackson, James Baldwin and childhoods lost

7th November 2017 Karin Merx Comments Off on “Have you seen my childhood?” – Michael Jackson, James Baldwin and childhoods lost

14th May 2021 KerryHennigan Comments Off on MJ Studies Today LXV