In this month’s MJ Studies Today column, Kerry Hennigan looks at some of the virtual celebrations for Michael Jackson’s birthday in the pandemic year of 2020. In addition to providing opportunities for making global connections, she suggests it has been a lesson in how we can come together in common cause when we share a vision; specifically, Michael Jackson’s vision for a better world.

Celebrating Michael Jackson’s birthday virtually, and what his philosophy can teach humanity. By Kerry Hennigan

In 2020, a year dominated by pandemic-prescribed social distancing, Michael Jackson fans were blessed with online events accessible to anyone connected to the internet on 29 August, the King of Pop’s birthday.  Director Spike Lee’s annual Brooklyn Loves MJ block party moved off the streets and into our homes via Michael’s official YouTube account.  With the annual fan event held by Jackson’s Estate in Las Vegas unable to proceed because of COVID-19 restrictions, free access to the virtual party was offered as an alternative.  A reported total of 550,000 fans tuned in to the event. [1]

This wasn’t the only gift Spike Lee and the Estate delivered on what would have been the pop icon’s 62nd birthday.  Lee unveiled a new version of one of the singer’s most popular short films. “They Don’t Care About Us 2020” directed by Lee (who had been responsible for the originals) is a blend of outtakes from what are known as the Rio and Prison versions.  These are combined with news footage relevant to current and all too frequent events on the streets of America and around the world.  While the Black Lives Matter movement takes centre stage in the new video, Jackson’s original statement retained at the beginning makes it clear that the song’s message speaks to injustices suffered by all humanity. [2]

In presenting the new film, Spike Lee stated, “Great protest songs can’t get old, stale or nonrelevant because the struggle still continues.  That’s why ‘They Don’t Care About Us’ is the anthem during this chaotic, pandemic world we are all living in.  To celebrate Michael Jackson’s Born Day, we have made the ‘They Don’t Care About Us 2020’ short film to continue the struggle for equality for all.  That’s the truth, Ruth.  Be Safe. – Spike Lee, Da People’s Republic Of Brooklyn.”

These birthday offerings from Lee and the Jackson Estate were not all that the singers’ fans could enjoy on their computers, phones, and tablets.  Drummer Jonathan “Sugarfoot” Moffett who provided the beats on The Jacksons’ Destiny, Triumph and Victory tours, for Michael on his HIStory world tour, the 30th Anniversary and United We stand concerts, and for This Is It, held an on-line zoom chat from London.  He spoke with fans about his craft and about his friend Michael and the shows he hopes to bring to the world in the (COVID-free) future. [3]  The cast of the forthcoming Broadway musical “MJ: The Musical” created a special video, [4] and Jackson fans in China unveiled “HIStory” statues of the King of Pop in Xi’an, Ganzhou, Yinchuan, Nanning, and the capital Beijing where another fan had arranged for a giant electronic billboard birthday card for Michael. [5][6]

There were numerous fan-generated on-line events through social media and various platforms.  The MJJ Justice Project team presented a birthday edition of its monthly MJ Global Family Zoom Chat on 25 August.  This is now available on the team’s YouTube channel and is extremely informative, given the special guests they were able to present.  The guests were Jackson choreographers and dancers Travis Payne and Stacy Walker; John Muto, co-founder with Prince Jackson of the Heal LA Foundation; and Pez Jax, author of the new book “The Story of HIStory”. [7]

Payne and Walker spoke glowingly of Jackson and reminded us what an empathic individual the King of Pop was off-stage.  Their recollections provide valuable insight into Jackson’s personality as well as his stage craft.  Particularly telling was his response to the negativity directed at him.  Payne explained that Michael would insist we just needed to pray for his detractors.  If they continued to pour scorn on him, denigrate his achievements and, worst of all, accuse him of criminal behaviour, he insisted we just needed to pray harder for them.  In a world made cynical by devastating headlines and untrustworthy politicians, Jackson’s attitude seems naïve.  However, I believe it says more about us than it does about him.

It is sad but true that humanity has travelled far from Jackson’s peace and love messages that harken back to the late 1960s.  Specifically, the days of Flower Power and Vietnam War protests when we chanted “Make Love, Not War” and stuck flowers into the guns of soldiers, and when as a child, the future King of Pop drew an image which he inscribed: “Stop the war.”  Jackson’s daughter Paris once defended her own attitudes to a detractor on social media by reminding us that her dad was “a hippie” and her mom a “biker chick”, so what did people expect?  If Michael Jackson’s 1960s’ style belief in the power of love seems unrealistic and overly simplistic in the 2020s, what does that say about humanity’s progress towards greater enlightenment and understanding of its role in the cosmos? [8]

Two millennia after the execution of a peaceful preacher from Galilee whom Jackson was raised by his mother to love and emulate, most of the world’s population still struggles to “love your enemies, bless those who curse you, do good to those who hate you, and pray for those who mistreat you and persecute you.” [9]  One does not have to be a Christian, or even religious, to see the wisdom of breaking the chain of violence that turns victims into aggressors.  However, Jackson’s approach was not to remain silent.  Instead he turned his anguish into art, of which “They don’t care about us” is an obvious example, as are “D.S.”, “Scream”, “Money” and numerous others.  While the song “Black or White” is an uplifting anthem, the famous panther dance coda to the song’s short film shows Jackson acting out his rage at widespread and entrenched discrimination. [10]

In celebrating Michael Jackson’s birthday 2020 we have been given the opportunity to make global connections through the internet and a chance to focus on things positive rather than negative.  For many Jackson fans who work to vindicate his name and legacy in the face of media opposition, this was a welcome reprieve, no matter how brief.  It has also been a lesson in how we can come together in common cause when we share a vision; specifically, Michael Jackson’s vision for a better world.  Whether through his protest songs like “They Don’t Care About Us”, “We’ve Had Enough” and “Earth Song” or his appeal to “Heal the World”, his message remains no less potent, and increasingly important today.  Despite what his detractors might say, humanity can do much worse than follow the philosophy he espoused.

[8]  Paris Jackson on Twitter, and as reported in the Daily Telegraph Nov 9, 2017 https://www.dailytelegraph.com.au/entertainment/sydney-confidential/paris-jackson-is-in-australia-get-over-it/news-story/16c93e5c530ba5bffc3c7dccbb4cbf2a

Photo collage: “Paying tribute to the King” compiled by Kerry Hennigan, September 2020.  No infringement of photographic copyright is intended in this not for profit, educational exercise. 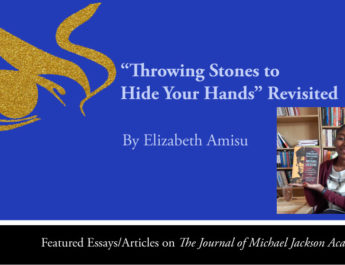 ‘Throwing Stones to Hide Your Hands’ Revisited by Elizabeth Amisu