Abstract: “Michael Jackson’s This Is It”, the movie, premiered eleven years ago – on October 28, 2009, just four months after the King of Pop’s death had shocked the world. Opinions on the film have differed markedly amongst Jackson’s fan-base, but in this month’s column Kerry Hennigan considers what the film has meant, not only for Jackson’s legacy, but for members of his creative team who were with Michael on the last night of his life.

“A spirit embodied by music”: considering Michael Jackson’s This Is It documentary on its anniversary 2020. By Kerry Hennigan

On October 28, 2020, the Michael Jackson Estate’s online team posted a message on the pop icon’s official website and social media accounts to mark the eleventh anniversary of the premiere of “Michael Jackson’s This Is It” in theatres internationally.  They included a quote from the film’s director Kenny Ortega, who recalled Jackson’s message to his team during rehearsals for the live shows intended for London’s O2 arena commencing July 2009.  “This is it, a call to arms,” the superstar said.  “We have to all realize how important it is to invest ourselves in pumping more love back into the world.”  When Jackson died on June 25, 2009, the world was shocked, the internet crashed, and his creative collaborators were left with a stillborn show that could have been the King of Pop’s greatest work of art. [1]

In a podcast which aired in October 2020, choreographer and long-time Jackson collaborator, Travis Payne, recalled the need for Jackson’s devastated team to not let “This Is It” die with its creator.  “Conversations were had, and the decision was made to tell the story of what was to be through a documentary.  Fortunately, we had archival footage that we had through the rehearsal process and if we could piece it together some kind of way, we could at least let Michael’s fans know what he was planning and how excited he was…how committed and involved he was.  No one had ever gotten to see his creative process.  No-one had ever gotten to see the extreme amount of detail he put into every aspect of his shows and his business, and it was time… it was his greatest endeavour, not because of the workload but because of his significance and its meaning and his emotional connection to it, and his purpose here being wrapped up partly in This Is It.” [2]

Thus, the movie “Michael Jackson’s This Is It” came into being.  Instead of a record-breaking live show residency, “This Is It” became the biggest grossing concert film in the world, not only because sentiment for Jackson following his passing was running high, but because of what the film revealed about the man it depicted.  Payne believed “This Is it” provided an opportunity for millions more people to see and hear and be reminded of Jackson’s messages than the pop icon would have reached through his live shows.  Besides, “Some Michael is better than no Michael,” he said, “so I was always in support of the film, because I knew that even though every take wasn’t perfect and every angle wasn’t amazing, and every look wasn’t flattering… it was very therapeutic, and it was something I think we as a community needed at the time for closure.” [3]

Following the eleventh anniversary commemorative statement by his Estate, comments on social media from Jackson’s fans were predictably mixed, as per the divisions in his fan base on the subject of the film.  Some love it and feel it stands as a tribute to Jackson’s genius; others revile it as representing his premature demise from an overdose of propofol administered by his personal doctor to alleviate his chronic insomnia.  Before the film’s release, some fans and family members asked whether, with Jackson himself not able to give his seal of approval to the film, should it exist at all?  Not an unreasonable question given Jackson’s perfectionism and habit of holding back projects – sometimes for years – until they were worked and reworked to his exacting standards.

Some of these concerns were allayed with the premiere, as “This Is It” brilliantly highlighted Jackson’s creative process and quality control over the live show he was crafting with Ortega, his co-director and friend, and a veteran of previous Jackson tours (Dangerous and HIStory) and other live events.  “[Jackson] corrects timing, refines cues, talks about details of music and dance,” the late movie critic Roger Ebert noted in his review of the film.  “Seeing him always from a distance, I thought of him as the instrument of his producing operation.  Here we see that he was the auteur of his shows.”  Ebert admitted the dramatic details that had surfaced following Jackson’s death had led him to expect to see a sick man forcing himself through gruelling rehearsals.  Instead, Jackson was “a spirit embodied by music.” [4]

Between the time of Jackson’s passing at his rented Holmby Hills mansion, and the subsequent criminal trial against his doctor, Conrad Murray (found guilty of involuntary manslaughter) and the civil case brought against concert promotors AEG by Jackson’s mother on behalf of herself and his three children, many stories circulated through the print and electronic media.  Some of these were attempts to reveal a broader conspiracy behind Jackson’s death beyond the culpability of his doctor.  All of these stories have coloured fans’ reactions to the “This Is It” film, justifiably or otherwise.  Yet it would be a tragedy if the film’s unparalleled glimpse into both the human and creative side of a show business genius could not be disassociated from the shock of Jackson’s death, and the nature of it – a homicide due to criminal negligence by a medical practitioner who had the credentials to know better.

Nevertheless, without denigrating the opinions of those who wish to distance themselves from the film out of respect for what befell its star, there are other factors to consider in assessing the legacy of “Michael Jackson’s This Is It”.  The film attracted many viewers who, even if they had once enjoyed Jackson’s best known hit songs, had never seen him perform live or closely followed his career.  They probably were aware of the controversies that beset him, and more than anything else, they were curious about him.  They were, perhaps, interested to see him presented in a predominantly unvarnished and raw fashion which might demystify the man who had been mercilessly pilloried by much of the media for more than two decades.

Rather than dwell on the tragedy that caused “Michael Jackson’s This Is It” to be launched onto a world now bereft of the artist himself, it seems more beneficial to remember his final words to members of his team at the end of that last night of rehearsals.  They are characteristic of the personality of the man himself.  Travis Payne recalls telling his friend, “Good night. Love you,” to which Jackson replied, “I love you more.” [5]  These words, more than any others, were Jackson’s automatic response to friends, fans, and the world in general.  They verify what Roger Ebert wrote having seen “This Is It.”  “Michael Jackson was something else.” [6]

[1]  michaeljackson.com.  “Eleven Years Ago Today, ‘This Is It’ Premiered In Theatres”.  28 October 2020.  https://www.michaeljackson.com/news/eleven-years-ago-today-this-is-it-premiered-in-theaters/

“Michael Jackson’s This Is It” is readily available to purchase on DVD and Blu-ray and digital download.  It is also available to stream on some streaming services such as Prime Video or Netflix in various countries.  https://www.amazon.com/Michael-Jacksons-This-Jackson/dp/B002VL2PTU/ 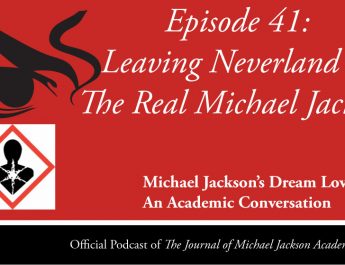