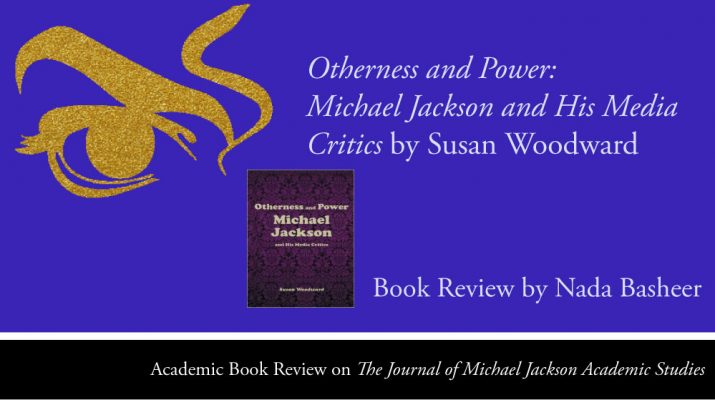 Academic Book Review of Otherness and Power: Michael Jackson and His Media Critics by Susan Woodward
By Nada Basheer

Michael Jackson was just two months shy of his 51st birthday — and had been preparing for his comeback tour, This Is It when his sudden death shook the world. For all his many millions of fans, which he accrued during the span of a remarkable four-decade musical career, Jackson is largely viewed as a saintly figure and as an exceptional artist and producer. He was characterized by people who associated with him as a genuinely down-to-earth person. Those who knew him spoke highly of his compassion and kindness. However, the media regularly painted a totally different picture of Jackson.

In this innovative analysis of Michael Jackson’s cultural impact; Susan Woodward puts Jackson’s most hostile critics under the microscope and examines the origins and psychological basis of how such extreme malicious attitudes come about. In an attempt to unmask the media’s misrepresentation of Jackson, their vicious criticism — which could easily be viewed as a caricature — and the severe damage they did to him.

‘Chapter One: Introduction’ provides a brief summary of when the media’s negative representation began in 1984 during the preparation of a concert with his brothers, in which Jackson was suspected of taking advantage of his fans in favor of his commercial success. Woodward asserts that after the tour was over, the ridicule, however, only grew over time, ‘Jackson continued to be mocked, sometimes in hateful language, for perceived eccentricities and his changing appearance, and his remarkable talent was often treated dismissively.’ This leads the author to ask the fundamental question, ‘how did two such dramatically opposing views of one individual come about? How could Jackson’s fans and many in the media, who after all were reacting to the same set of information, come to such different conclusions, each side fully believing that they were right?’ While Jackson fans concur racism as the foremost element that fueled the media’s negative criticism, Woodward unveils another major element: a perception of extraordinary power. She explains, ‘the perception of Jackson as “other” sprang from his fluid and unreadable identity as well as some of his behavior.’

The book focuses on three examples of writing in which the recognition of Jackson’s power, and the unsettle that it caused, is unequivocal. Woodward explores in depth how Jackson’s power was seen and the unconscious response to this exceptional power that went beyond affluence and fame.

‘Chapter Two: American Messiah’ examines Trapped: Michael Jackson and the Crossover Dream, by the music critic Dave Marsh, which was published in 1985. Marsh’s Trapped is the first book-length criticism of Jackson and it’s the first work that Woodward chooses to focus on by detailing the open letters that Marsh addressed to Jackson. Woodward analyzes the root of Marsh’s harsh criticism at a great length and depth. She rationalizes, ‘his initial feeling for Jackson as a messianic figure was clearly an unrealistic idealization that was destined for disappointment. Once that disappointment hit, Marsh devalued Jackson, seeing him as untrustworthy, confused and bizarre.’

The author moves on to analyze in ‘Chapter Three: Web of Fear’ an article about Michael Jackson entitled ‘Losing His Grip’ by journalist Maureen Orth that was published in Vanity Fair Magazine in 2003. Woodward asserts, ‘unlike Dave Marsh, Orth gives no sign that she had any appreciation of Jackson’s talent or that she was ever sympathetic to him.’ But the author clarifies that although Orth, just like Marsh, perceives Jackson in terms of power and otherness, ‘but she fears his power and feels that he uses it to manipulate and harm others.’ Chapter Two gives the readers a closer look into Orth’s informants and the background of her article. Woodward reflects, ‘was bullying of Jackson by the media effective? Did the years of rumors and falsehoods about Jackson damage him in any substantive way?’ A question which she gives a detailed answer to before ending this chapter.

The last work that Woodward expounds in ‘Chapter Four: Angelism and Beastialism’ is The Resistible Demise of Michael Jackson, which consists of a collection of essays written by 23 academics, music writers, and bloggers, edited by Mark Fisher and was published in 2009. Although Woodward does not hesitate to describe it as, ‘a fairly useless book.’ Due to the lack of factual reliability, as the author states. She goes on to explain, ‘it can also be seen as a Rorschach test of attitudes toward Jackson, a free association that produces unconscious views along with the conscious. Therein lies its value as a work to be analyzed.’ Woodward further investigates long lists of terminology that show these writers’ perception of Jackson as powerful. She observes that in spite of the authors dreadful representation of Jackson, ‘there is simultaneously something else of a completely different nature going on in their writing.’ She reveals that the authors continually used terminology that described Jackson’s talents in ardent expressions which portray Jackson ‘as having a power of a king or sometimes a despot and, most surprising and most frequently, that represent him as a divine or supernatural figure.’ But did Jackson intentionally aim to be perceived this way?

Otherness and Power closes with ‘Chapter Five: Origins of Power’ in which Woodward highlights the source of the view of Jackson as ‘angelic’ and powerful. She asks, ‘how did this astonishing view of Jackson as a powerful, supernatural being come about?’ Throughout this chapter, the author closely examines the ways Jackson’s short films furthered the ‘angelic’ perception. ‘But the short films are obviously performances, not representations of Jackson as a real person,’ argues Woodward. However, she scrutinizes how Jackson by cultivating a mysterious/magical public image of himself made millions of people react as, ‘if seeing him was a religious experience.’ Yet, Woodward states that it appears that Jackson did not foresee the downside of such perception: that some might see him ‘as a freak or morally suspect and seek to diminish him.’

Although it is distressing to read the demeaning and hateful descriptions of Jackson by many of his critics (or shall we say adversaries?), Woodward debunks and exposes their hidden fear and their bewilderment by his extreme power and as the author coins-his extraordinary otherness. ‘It is remarkable, however, that after decades of hostile, inaccurate coverage by the media, the image of Jackson as a powerful, ‘angelic’ being survived. While one would expect such a view of Jackson from his fans, it is surprising to find such strong evidence of it in the writings of his critics,’ acknowledges Woodward.

Woodward’s book is an excellent and a thorough analysis, which leaves the readers with a different insight into what signifies Michael Jackson more than any other popular culture figure. The writing style is thought-provoking and eloquent. It is an essential read for journalism students and for those who are studying or interested in History & Criticism or simply looking to understand the cultural influence of Michael Jackson and his indisputable power. Also, it is a suitable read for those who have read Harriet Manning’s Michael Jackson and the Blackface Mask and Joe Vogel’s Featuring Michael Jackson.

Nada Basheer is an avid non-fiction reader and reviewer, a long-time Michael Jackson fan and student. She runs a successful blog, filled with fantastic insights and remarkable detail on her reading at Overloved and tweets prolifically at @overloved. Her work for The Journal of Michael Jackson Academic Studies, includes an academic review of ‘Keep Moving: The Michael Jackson Chronicles’. Find out more about Nada here. 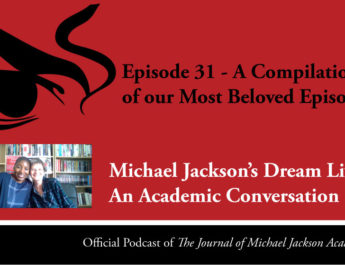 Episode 31 – A compilation of our Most Loved Episodes