Abstract: Michael Jackson loved Charlie Chaplin. He dressed as Chaplin’s famous movie character, the Tramp, for photoshoots and incorporated some of the Tramp’s idiosyncratic movements in his performances, most notably in the role of the Scarecrow in the 1977 film version of The Wiz. In this month’s MJ Studies Today column, Kerry Hennigan looks at Jackson’s fascination with Chaplin, and the song he recorded as an ultimate tribute to the silent screen icon.

Column by Kerry Hennigan, editor of the free monthly newsletter, A Candle for Michael, administrator of the widely subscribed Facebook group “Michael Jackson’s Short Film ‘Ghosts’” and an MJ blogger on WordPress. Kerry is a student of Ancient and Medieval History, Archaeology, Anthropology and Religious Studies and has a Certificate in Archaeology of the Ancient World from Cambridge University.

The Scarecrow and the Tramp: Michael Jackson, Charlie Chaplin and “Smile.” By Kerry Hennigan

After Michael Jackson’s death in 2009, a series of portraits of him impersonating Charlie Chaplin, taken by photographer Steven Paul Whitsitt in 1995, were included in the Michael Jackson Opus.[1] Their presence in a book celebrating Jackson’s life and career were a tribute to the pop icon’s love for Chaplin, a love that dated from his childhood when young Michael had sketched Chaplin’s signature character, the Tramp. Born on 16 April 1889, Charlie Chaplin had been a multi-talented superstar from humble beginnings who could act, direct, write and compose music. He was also, like Jackson, a perfectionist when it came to his art.

Charlie Chaplin’s influence on Jackson as a performer is evident in the latter’s portrayal of the Scarecrow in the 1978 film version of The Wiz stage musical, adapted from The Wizard of Oz. In it, Michael, then still a teenager, can be seen capering unsteadily on his feet after Diana Ross’ Dorothy, having just been released from his pole overlooking a bedraggled patch of corn plagued by crows.[2] “I had always loved the Charlie Chaplin movies,” Jackson wrote in his 1988 autobiography Moonwalk.[3] In creating his characterisation of The Wiz’s Scarecrow, Jackson explained “I wanted something of the quality of [Chaplin’s] characters in my Scarecrow.” He revelled in the costume and character of the Scarecrow, behind which the shy, private Michael Jackson could take refuge while the performer could stretch himself for a medium he loved – movies.

Even more than for his role as The Wiz’s Scarecrow, in the next decade and for the rest of his life, Jackson would be identified most readily by his Billy Jean costume – the short pants, white socks, sequined black jacket, white t-shirt and fedora. Jackson’s Billy Jean became the equivalent of Chaplin’s Tramp, in that it was a look that became indelibly impressed on the public’s imagination, where it remains – an instantly and universally recognised part of Jackson’s artistic legacy.

In Man in the Music: the Creative Life and Work of Michael Jackson, Joseph Vogel writes that it is with Chaplin that Jackson might have felt the deepest artistic kinship. Chaplin was “a similarly paradoxical figure who rose out of poverty to become the biggest entertainer of his age. One can find Chaplin’s movements, stylizations, and combination of exuberance and pathos throughout Jackson’s work.” [4]

“It was his whole life,” Jackson said in a 1982 interview in which he explained what it was about Chaplin that inspired him. Chaplin’s success, following an impoverished childhood, including periods spent in workhouses, was proof of what could be achieved by believing in yourself. Michael saw Chaplin’s childhood hardships reflected on the screen, and concluded “that’s what I like to do, to bring all these truths out.” [5]

Academic Elizabeth Amisu, in The Dangerous Philosophies of Michael Jackson, highlights Chaplin as one of the well-known artists who can be used as a prism through which to see Jackson, “especially in terms of biography and reception.” [6] Commensurate in status to Jackson, Chaplin was a pillar of Hollywood cinema who was “equal parts adored and reviled through his long career,” Amisu writes.[7]

The parallels between Jackson and Chaplin include them both being subjected to years of scrutiny by the FBI. Chaplin’s humanism caused him to run afoul of the anti-communism crusade conducted against Hollywood luminaries, including writers and directors, in a time of acute Cold War paranoia in the US. US Senator John McCarthy was especially condemning of what he considered to be Hollywood’s role in spreading communist or socialist views amongst the general public. It was a time of fear and hysteria, subsequently highlighted for posterity in films like “The Front” (1976), “Guilty by Suspicion” (1991), and “Good night and good luck” (2005).[8] It is also true that Chaplin’s marriages and relationships with young women provoked controversy that was used to undermine his reputation and integrity as an artist.

Chaplin wasn’t an American citizen, and because of his views was able to be denied re-entry to the United States after travelling abroad. Exiled from the country that had made him a star, he eventually settled in Switzerland, where he died of heart failure in his sleep on Christmas Day 1977. He was 88 years old. Today the family property houses “Chaplin’s World,” where Michael Jackson’s homage to Chaplin is acknowledged by a wax figure of the pop icon in the museum.[9]

Jackson had visited members of Chaplin’s family, including his widow Oona (d. 1991), at home in 1988 and would do so again when in Europe on or between touring. Charlie’s granddaughter Laura Chaplin recalls Michael being at the mansion three times, being very shy, afraid of the family’s big dogs (they had nine in all) and playing the PlayStation. Typically, when it came time to sit down at the table for a meal, Michael sat with the children. Laura also remembers seeing him doing pirouettes in the garden.[10]

In what must be Jackson’s greatest tribute to Chaplin’s inspiration, the pop icon recorded a song for his album HIStory: Past, Present and Future, Book 1 (1995) which had originally been written as an instrumental by Chaplin for his film “Modern Times” (1936). The lyrics to “Smile” came later, being written by John Turner and Geoffrey Parsons. Regrettably, the intended single release of Jackson’s recording of the song was cancelled, along with the short film that would have accompanied it.

Some sample footage featuring Michael dressed as Chaplin’s Tramp intercut with footage of Chaplin himself was created, but the cost of making the complete short film deterred Jackson’s record company, along with the Chaplin family’s request that the project using Charlie’s classic footage not proceed. Sadly, as reported by Pez Jax in The Story of HIStory, the location of the sample footage viewed by some of Jackson’s recording team and photographer Steven Paul Whitsitt, “today remains unknown.” [11]

In an interview conducted by Brice Najar, Brad Buxer recalled Jackson recording “Smile” song with a symphonic orchestra. “These days you do everything separately. But when he sang along with an orchestra, Michael felt the juice of the orchestra and the orchestra felt the electricity because Michael was in the room, so everyone played and sang differently.”  Buxer added that recording engineer Bruce Swedien considered “Smile” to be Jackson’s “best vocal ever and I totally agree with Bruce.”[12]

A few copies of the song that were pressed for single release have become a much sought after, exorbitantly priced, collector’s item. A series of photographs (taken by Whitsitt) of Jackson dressed as Chaplin and recreating scenes from the latter’s 1921 film “The Kid,” emphasized Jackson’s source of inspiration. It was said to be one of Jackson’s favourite songs and was sung at his memorial service in Los Angeles by his brother Jermaine.

Following that event, MTV quoted the closing lyrics of Smile on its website: “That’s the time you must keep on trying/ Smile, what’s the use of crying? / You find that life is still worthwhile if you just smile.” It is, the online piece concludes, “a simple, optimistic message with a bright, soaring vocal — it’s no mystery why the King of Pop loved it so much.”[13]

Jackson had explained it back in 1982, when he called Chaplin the king of pathos. “He knew how to make you laugh and cry at the same time…I relate to him. I sometimes feel like I am him.” [14] It can also be said that the song “Smile” which Jackson infuses with pain and pathos, as well as joy and gentleness, is an apt finale on disc two of the HIStory double album, which artistically chronicles the trials and tribulations, loves and triumphs of Jackson’s own life.

As with Chaplin himself, Michael Jackson’s art has outlived its creator and immortalised him.

[2] Universal Pictures. “Ease on Down the Road.” Michael Jackson as the Scarecrow and Diana Ross as Dorothy in The Wiz (1978). https://www.youtube.com/watch?v=uNKmKOjGUbw

[8] “McCarthyism.”  Wikipedia, in this instance, provides a reasonable (non-academic) overview for those who don’t know about it or didn’t live through it. https://en.wikipedia.org/wiki/McCarthyism

Movieclips. “You Can’t Win” Michael Jackson as the Scarecrow in The Wiz (referred to in the title of the clip as “The Crow Anthem” https://www.youtube.com/watch?v=3r1ssg1LIt4 The full movie of the Wiz is available to purchase or rent on YouTube, is available on DVD and on some streaming platforms.

“Chaplin” the movie starring Robert Downey Jr, directed by Richard Attenborough, 1992. Check for its availability on streaming platforms in your country of residence.

Michael’s performance of “Smile” from the HIStory album. https://michaeljackson.lnk.to/smileAW!news200203

Illustration: “Smile” photo collage compiled by Kerry Hennigan using photograph by Steven Paul Whitsitt. No infringement of photographic copyright is intended in this not for profit, educational exercise. 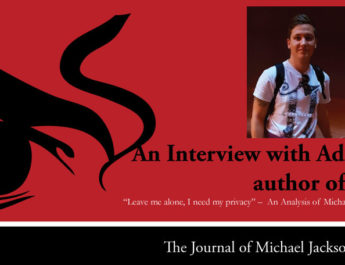