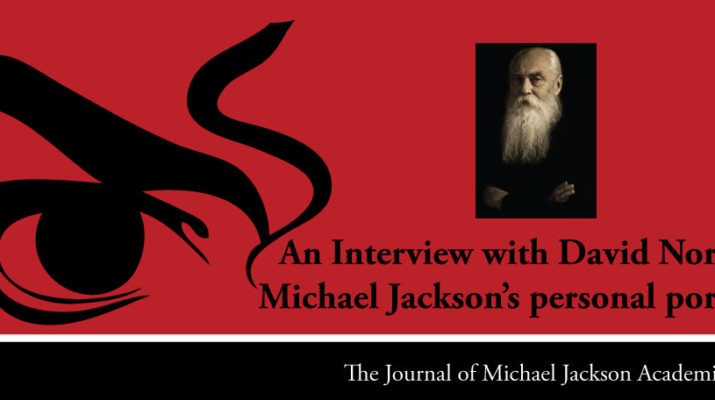 Abstract: In this interview, David Nordahl talks about his experience working with Michael Jackson on art and design projects, and their friendship.

Q1 – In just a single sentence, what does Michael Jackson mean to you?
In the beginning, Michael was a client, but he became my friend.

Q2 – Can you tell us a little bit about yourself and your art?
Like Michael, I grew up in the Midwest. In 1964, my friend Bart de Malignon and I founded a poster company called Pandora Productions. My family and I moved to Steamboat Springs, Colorado when I began painting the nineteenth century Apache Indians in 1977. We moved to Santa Fe, New Mexico in 1979 and shortly after I did a commission for Steven Spielburg. Michael had seen the painting in Steven’s office and shortly after contacted me. This contact began a twenty year collaboration with Michael on many different projects.

Q3 – You worked closely with Michael Jackson since 1988. What excited you most in working together with Michael Jackson?
When Michael first approached me to do some paintings I was reticent because I was used to doing my own ideas. I was afraid he would make all the decisions on what and how the paintings would be done. But all my fears vanished when we began working together. All our projects were truly collaborative efforts. Michael’s premier interest was to make sure all of our projects were the best we could do – I concurred.

Q4 – Michael Jackson himself was a talented visual artist. Did you ever teach him to draw/painting techniques?
When I first met Michael in Denver (he was appearing there on tour) I brought all my equipment and art materials so we could draw together. It was fun but I noticed that he would get frustrated if he couldn’t do the exercise correctly. We worked together for a few afternoons and I was surprised at how quickly he would catch on. Michael was a very busy person with his music so it didn’t leave him a lot of time to practice his drawing skills. If he had chosen to be a painter rather than an entertainer I’m convinced he would have been a great artist.

Q5 – In your online gallery you have this beautiful triptych The Knight. To what extend was this Michael Jackson’s idea and does it relate to his awareness of the history of High Status black people?
This triptych was entirely Michael’s idea and it was the only painting I ever did for him with a deadline. I never asked him what the painting was for. I’m quite sure Michael was aware of the history of High Status black people. He was very proud of his heritage.

Q6 – What is/was your fascination drawing, designing and painting Michael Jackson and for Michael Jackson?
When I first started working with Michael, I thought there may be a few projects then I would go back to my own work. I was so wrong. There became so many projects that they overlapped. I didn’t get back to my own work for the next 20 years. I didn’t mind – I was enjoying working on a myriad of different kinds of projects and I enjoyed working with Michael.

Q7 – You not only were Michael’s personal portraitist, you also designed features for the Neverland Park. Can you tell us what that meant to you and to what extent did Michael Jackson participate in the actual designs?
Neverland Valley was Michael’s homage to the children of the world, especially those that were ill, underprivileged or neglected. Michael wanted the children to have the time of their life and to forget their troubles, at least for the time they were at the ranch. ! Michael had a hand in everything that was done at the ranch. His attention to detail was extraordinary. He had every ride in the Midway specially modified to protect children who had physical impairments. The people who managed the rides were sent to Kansas City every six months to practice extraction techniques for children who were physically challenged.  I was happy to donate whatever I could for such a noble project.

Q8 – Do you think there should be a place for Michael Jackson’s personal art and artwork you created for him?
From the time I first met Michael he always talked about an interactive museum that would feature his music and the artwork he had compiled. I’m sure his family is aware of his wishes, but at least up till now there doesn’t seem to be any interest.

Q9 – What, if any, influence did Michael Jackson have on you? Professionally? Personally? Peace, Love, Equality and the environment were Michael’s message through his music and his actions. These values reinforced my own commitment to his message.

Q10 – Do you think there is a place for Michael Jackson in schools and Universities, studying his art?
Michael’s music has influenced an entire generation of music makers. Michael created a persona of a singer-dancer in the tradition of Fred Astaire. His ground breaking music and video’s earned him a fan base that included people of all age groups. Certainly, much can be learned from his life, his music and his charitable acts.

Q11 – Final thoughts: what does it mean to be/have been the personal portraitist of Michael Jackson for all those years, especially 8 years after he has passed away?
I spent extended time with Michael and then with Michael and his three children. These kids were a joy to be around. Never once did I hear them beg for anything, cry or throw a fit that is so common among most kids. I enjoyed our work together, the laughs (Michael had a great sense of humor), and our spirited conversations and our good natured arguments. I’m not the only one to miss Michael – there are millions of fans around the world and all of the children his charitable acts could have aided.

Thank you David Nordahl for taking the time to talk with us.

Born in 1941, Nordahl grew up on a farm in Minnesota. He drew and painted from an early age.
In 1978, Nordahl began painting the Apache. Of all the Native American tribes, the Apache continue to be the least known or understood.
In 1988, Nordahl began painting for Michael Jackson. Together, they created paintings and plans for amusement parks and attractions in Las Vegas. This working relationship continued till Michael’s death in 2009.
Nordahl lives in Santa Fe, New Mexico and continues to paint the Apache as well as fantasy, people and animals. His paintings can be found in museum and private collections in the U.S. and many foreign countries.

All art exhibited in this interview is copyright of David Nordahl.

Learn more about the paintings of David Nordahl here

Read more of our interviews here

One thought on “An Interview with Artist David Nordahl”